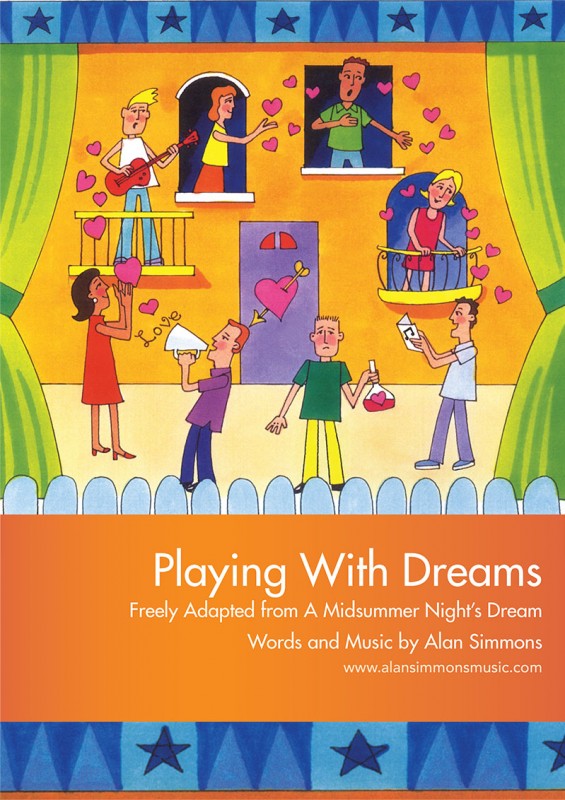 Playing with Dreams is set in modern times and the language is contemporary. Freely adapted from Shakespeare’s Midsummer Night’s Dream, the story is recognisable from the Shakespeare original, but makes a wonderful, entertaining 50 minute musical performance for your school.

A new show opens in 4 days and it’s chaos! Hermione, the leading lady, is troubled. Denis, the leading man, tries to work his usual charm but he is part of the problem. Denis has shown a real interest in Hermione, but she is in love with Les, a humble member of the chorus. Hermione and Les meet in secret and agree to run away together. Bryony overhears and sees her opportunity to save the show and win back the affections of Denis. She tells Denis and they follow the lovers.

Director Big Ron is in a pickle.

Two days to go and he’s lost four characters. Big Ron’s assistant, Chuck, can help. In a theatre down the road there’s a magic show with a love potion. Rub one drop in your eye and you fall in love with the next person you see! Could this solve the problem with Hermione and Denis? Things go wrong. The potion finds its way into the wrong eyes and chaos prevails.

What a mess. Can it be sorted? Of course it can, this is theatre!

Each song in the production is accessible to Key Stage 3 and Key Stage 4 performers (and possibly Key Stage 2). The majority of the songs are in unison, occasionally splitting into simple 2, 3 or 4 part sections (but don’t worry – they are simple to grasp).

If you would like to get an idea of the difficulty, email the inspection copy which gives a few pages from each song and a sample of the script).

An SATB score is also available here and a set of orchestra parts are available here (although the play can be performed with just the piano, or even the CD backing tracks)