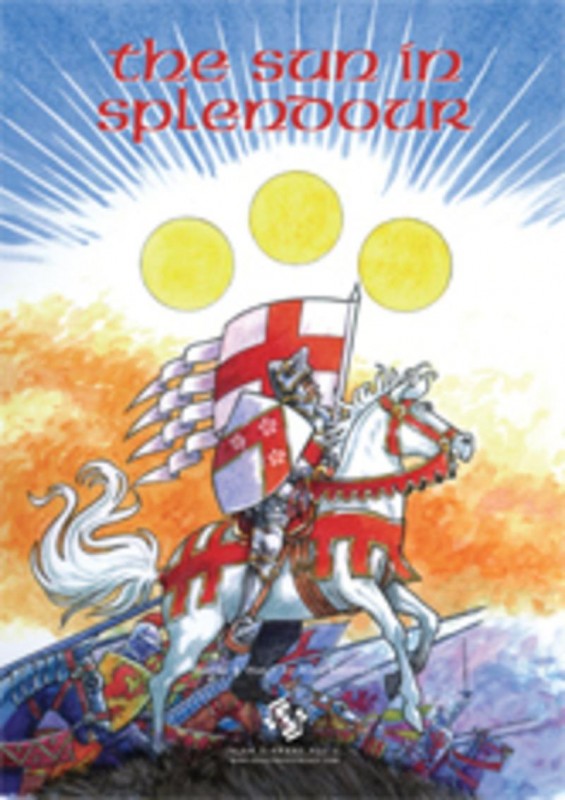 The Sun in Splendour is a dramatic piece of choral music for children to sing. It tells the true story of a crucial part of English history in a way that the singers will find exciting and challenging but certainly within their capabilities.

Starting at Christmas 1460, the songs and narration follow the progress of the Wars of the Roses to the Battle of Towton just three months later on Palm Sunday 1461. Towton remains the biggest, fiercest and bloodiest battle ever fought on British soil.

The Sun in Splendour is a major work for children, covering an important topic and telling the story through very singable songs. The music splits the singers frequently into two parts, but never more than two.

The first performance took place on Saturday 17th March 2007 in Huddersfield Town Hall, with over 300 performers from Wakefield Schools. It was a stunning success, living proof that if children are given a major project that will stretch them but will also fascinate them, they will rise to the challenge and silence the doubters!

1. Nowell for The Merrie City.

“The Merrie Citie” is Wakefield, which in 1460 was overlooked by the great fortress and Yorkist stronghold that was Sandal Castle. This opening song starts with an old traditional Christmas carol that could easily have been sung at Sandal that Christmas in 1460. It was a popular carol of the day and is sung here unaccompanied by one soprano soloist. It leads without a break into an instrumental interlude and the main carol itself. From the moment the instruments start, the music is new, but tries to maintain a style appropriate for the period.

2. A Feast for the Duke of York

When Richard, Duke of York, and his army arrived in Sandal they were greeted with a feast of lavish proportions to celebrate Christmas. Although there is no record of exactly what they ate, the “menu” that is mentioned in this song was taken from a similar feast that took place in York for a similar number of people. We can reasonably assume that the Sandal feast was similar.

The down side of such a feast is its aftermath. It’s the middle of winter and food is not readily available. Richard has no alternative but to send out a foraging party, effectively to steal food from the local people. Not a popular move!

The Lancastrian army is already a step ahead. They cut off the foraging party, leaving Sandal without food and tempting Richard to lead his army into battle prematurely.

The advice Richard receives from his generals is to wait in the castle until his son, The Earl of March, arrives with reinforcements. Richard listens to them, but eventually lets his heart rule his head and decides to attack. Reluctantly, his generals support him.

6. The Battle of Wakefield

Greatly outnumbered, Richard leads his army out of Sandal Castle on the 30th of December 1460 and into battle with the Lancastrians. The Yorkists never had a chance. They were not only outnumbered, but also outflanked and outwitted. In a matter of hours Richard and his young son Edmund were dead, and his army routed. Richard himself was killed on a spot now commemorated by a stone memorial. It stands in the grounds of what used to be Manygates Middle School which is now, appropriately, the Wakefield Music Centre.

7. The Sun in Splendour

Richard’s eldest son, Edward, hears the death of his father and brother whilst he is still in the west country. The news strengthens his resolve and he inflicts a crushing defeat on the Lancastrians at the battle of Mortimer’s Cross near Ludlow. It is here that his emblem, “The Sun in Splendour” was adopted after a most remarkable occurance. Just before the battle, clearly visible through the mist, three suns were seen shining in the sky. Today this phenomenon has been explained as a parhelion, or “mock sun” and is caused when light is refracted through ice crystals. But in the 15th century it was astonishing, and it shaped the course of English history for years to come.

From Mortimer’s Cross Edward returned to London where, at Westminster Hall, he declared himself King of England. As Henry was a deeply unpopular king in London, the local people welcomed Edward and supported him fully. From here, he rode north to confront the Lancastrian army at Towton.